Martin Kemp This and That

Last week I was in Vienna for a gala opera performance for Gheri Sackler’s admirable charity, Wiener Lerntafel (http://www.lerntafel.at/index.php?home), dedicated to rescuing young children who are in danger of falling out of the educational system. There was an exhibition of Lucien Freud at the Kunsthistorisches Museum. Each time I see a body (no pun intended) of his works, they look more and more limited. The retrospective at the Tate showed that he really cannot handle more than one figure. His notable trick, turning gobs of impasted paint into flesh, is considerable, but it too has severe limitations. Walking from the room that housed his biggest paintings into the halls housing Titian, Rubens, Dürer, Brueghel & co. puts him into unkind perspective. You may say that the comparisons are unfair, but the reality of the present art market means that you have to pay as much for a Freud as for a major old master.

His version of Chardin’s Young Schoolmistress, included in the Vienna show, demonstrates what is wrong. Chardin’s painting is a miracle of eloquent and restrained precision. The tender yet prissy delicacy of the teacher’s profile is wonderfully translated into the sharp and steely gleam of the hat-pin with which she points to the rows of small images in the open book. The chubby child’s blunt face and podgy hand serve as a telling counterpoint. Chardin exploits his unique kind of clotted surface, like unglazed ceramic, to create open surfaces that somehow become flesh and drapery. Nothing is overtly described, but he cajoles our perception into seeing materials that are not there.

Freud literally blunts all this – emotionally and formally. The schoolmistress’s face is given the standard Freudian lumpiness, and her incisively instructive pin is removed entirely. She points meaninglessly to a blank page, as does the child. The face of the child suffers less, but looses its translucent softness as it is battered into Freudian shape. Whereas Chardin invites us to see the structural folds of the drapery, as they respond to the interplay between tailoring and posture, Freud’s brushstrokes only convey a generic painterliness, which becomes an end in itself. Look for example at the “boat-prow” fold at back of the teacher’s lower neck. Chardin does just enough to let us sense its structural integrity. Freud’s thick splodge turns into nothing outside his own mannerism.  You may say Freud is doing something different from Chardin. Sure, he is painting “Freuds”. Chardin is painting “Chardins” in such a generous way that they also become something else in the eyes of the viewer. 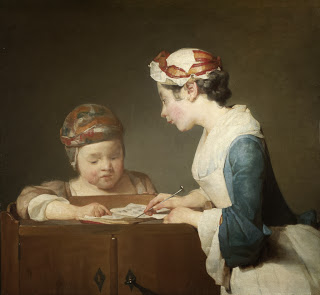 Freud is an artist with a highly recongisable voice. The best of his images of single figures are impressive and often poignant. But he is not really a great artist. Let’s get things in perspective.